I’m not here to tell you what to think. I’m just here to help you think critically.

There’s been a lot of discussion around Jesse Williams and Aryn Drake-Lee’s divorce. This very unfortunate situation has rendered various responses, specifically from the black community and especially because Jesse is now dating Minka Kelly, a white woman. While this dialogue started around Jesse and Aryn, this blog post is less about them and more about unpacking what our reactions/responses mean for “the movement,” and expressions and definitions of blackness.

Some believe that Jesse’s actions show poor character, a lack of integrity, and warrant us to revoke our support of him. It is important to acknowledge that this perspective is based on the assumption that Jesse cheated on his ex-wife, which he has denied. However, this brings up an interesting notion: do we expect activists and leaders of “the movement” to be faultless? Is perfection required for them to be credible and receive our support?

I think about Dr. Martin Luther King, Jr. While we hold him in very high regard for his work and advocacy for civil rights, we’ are aware of his infidelity allegations. Does Dr. King cheating on Coretta Scott King discredit his work? Should we cancel Dr. King?

With great power comes great responsibility so leaders will be held to high standards. However, no one is perfect and we all (continuously) make mistakes. While one may be an “expert” in one area, they may not have it all together in another. So where is the threshold? What shortcomings will we tolerate and which will we not?

Can a black person be pro-black but date/love someone who is not black?

Some are challenging Jesse’s (pro)blackness, finding his divorce from a black woman and/or dating a white woman to be hypocritical and negating of his advocacy for black lives, and more specifically, for black women (listen to his words about black women during his 2016 BET Humanitarian Award acceptanc 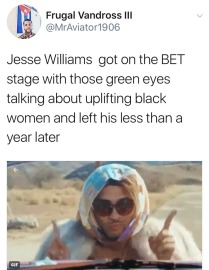 Blackness is often put in a (small) box.  Depending on how you speak, eat, your hobbies, neighborhood, being multi-racial…your black card comes into question and it just may be revoked. Could this be another example of this? Does dating/loving a non-back person get your black card revoked? Can a black person be pro-black without dating/loving someone who is black? Do we see black people who date non-black people as credible activists and advocates?

Do black men really get on and leave our a** for a white girl? 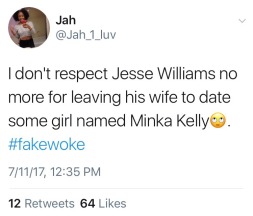 Now that Jesse’s relationship with Minka is public, some black women suspect that this is another example of a black man leaving for a white woman. The fact of the matter is that it may not be. Maybe this is just how love is happening for Jesse— maybe this is truly someone he has hit if off with and who he cares about. And he is totally free to pursue that.

However, that fact that this thought crosses the minds of many black women speaks to something with much deeper roots.

There is always truth in humor. The reason Kanye West’s line is so memorable is that we’ve all seen it happen. The idea that white women have always been a graduation present or lifetime achievement award for black men has become an accepted trope among black people. We quietly talk about it among ourselves, in barbershops and at cookouts.

The thought that rich, successful and famous black men eventually trade in black women for white women is such an acknowledged fact that we don’t even bother pointing out that the guy who wrote and rapped it left our ass for a white girl. 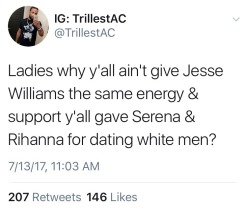 And after you’ve thought through all of that, ask yourself, would we even be having this conversation if Jesse was now dating a black woman? What does that mean?

I’m not here to tell you what to think. I’m just here to help you think critically. We must think beyond the surface. Take this information, think, and determine your truth.