This is a call in NOT a call out. I am not writing this to attack Kappa Alpha Psi or “put them on blast” or anything like that. I am writing this out of a place of concern and accountability, and because I have the privilege to be able to say something. I am a member of the Divine Nine so that gives me a little more room to be critical of the black Greek community. As wrong as it may be, we do not typically welcome feedback or critique from non-greek individuals…but that’s a whole other blog for a whole other day.

So to the issue at hand: yesterday, I cam across a flyer for a pre-Super Bowl party on Facebook. I read it to see who was hosting it and to my surprise, it was a chapter of Kappa Alpha Psi. I was shocked. I was like, hold up (insert thinking face emoji)…how? I immediately had lots of questions.

I think most of us know that Colin Kaepernick is a member of Kappa Alpha Psi Fraternity, Inc. And many of know that he is still a National Football League (NFL) free agent, with no teams signing him this season, despite him being statistically “better” than other quarterbacks who were signed. Some believe that Kaepernick has been blackballed for sparking protests during the national anthem before the start of games. 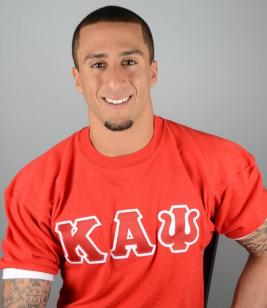 Ironically, Kappa Alpha Psi Fraternity, Inc. believes Kaepernick has been blackballed. In August 2017, the Grand Polemarch of the Fraternity sent a letter to the NFL Commissioner stating that he believes that Kaepernick has been “blackballed solely for exercising his Constitutional right to free speech,” and he expressed understanding for why Kaepernick kneeled stating that “enough is enough.” The letter ended with an urge for a public statement signaling an “all clear” to all the NFL teams in regard to Kaepernick, and the Grand Polmarch also offered Kappa Alpha Psi’s (pro bono) services to engage in dialogue regarding the issue. 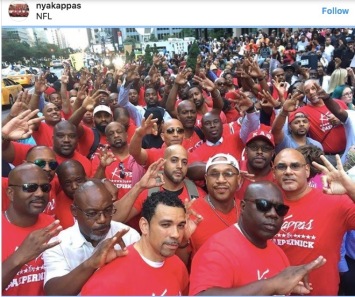 Then, later in August 2017, members of the Fraternity showed up in masses at the United We stand Rally, a protest in solidarity with Kaepernick in front of the NFL Headquarters in New York. Kappa members from the New York area were present, as well as members from various parts of the nation. Members also showed support through social media.

This is why I was shocked to see a chapter of the Fraternity hosting a pre-Super Bowl party, a celebration of the same organization that has “blackballed” a fraternity brother and that many members have protested. To host this party is contradicting to the stance of the international organization and shows zero cares for what Colin Kaepernick has and is still experiencing with the NFL.

(Note: I am not naive enough to think that all Divine Nine members, let alone all black people, are boycotting the NFL. I know that some people are watching and that’s each individual’s business. But if there’s going to be a Super Bowl party, can we at least not host them in the name of the organization that Kaepernick is a member of? Or any of our organizations, for that matter?)

Again, this is a call in NOT a call out. And it’s honestly not just to the Kappas; this message is for all of us because this could have been any of our organizations, and there will probably be members from all of our orgs at this party so we’re all responsible.

I’m gonna go ahead and say something that we don’t like to hear but as wrong or right as it may be, it is the perception and perception is reality: some non-Greek people question our commitment to uplifting the black community. They say we’re self-serving and elitist, committed to uplifting our members but looking down and distancing ourselves from the rest of the black community and the issues they face. Of course, many of us see it differently and think they just don’t understand.

We often run down our list of honorable mentions to “prove” that we are indeed about black liberation and are even the leaders of it: Martin Luther King, Jr., Coretta Scott King, Rosa Parks, Nikki Giovanni, Shirley Chisholm, Jesse Jackson, Huey P. Newton, just to name a few. And recently, many of us have added Colin Kaepernick to that list. But what does it mean when we proudly claim these members so that our organizations are viewed in high regard but we don’t actually support them or take action that carries on their legacies?

I honestly pray that the answer to that question is no because I believe that we have the power, privilege, influence, resources, numbers, education, and more to make a huge impact; and I think it is our duty. But in order to do that, this kind of stuff has to stop. We have got to care. We have got to be mindful. We have to be intentional. And, we have to be consistent.

This is a call in NOT a call out.

Aleidra Allen is a social change advocate and entrepreneur. With a background in higher education administration, Aleidra served as a higher education practitioner for 4 years. During that time, she coordinated leadership programs and multicultural education, and advised student organizations and fraternities and sororities, . However, as society entered into the current social movement, Aleidra’s career was redirected.

In September of 2017, Aleidra took a leap of faith and left higher education to start her own business. She is now the founder and owner of PIE, which stands for Purpose In Everything. PIE is a start-up social enterprise that sells every day products, adding purpose to the purchases by donating 5% of its net sales to fund social change work. The products are also ethically made, being sweatshop-free, and many of them are environmentally friendly.

PIE is committed to social justice, with the goal of inspiring consumers to contribute to social change through conscious and intentional buying. You can follow PIE on Facebook, Instagram, and Twitter: @piemovement, and visit the PIE website at www.piemovement.com to #BuyOnPurpose. If you are interested in having Aleidra facilitate diversity and inclusion trainings/workshops for you school, organization, or corporation, please email info@piemovement.com.

Aleidra has shared her perspectives on larger platforms as a repeating guest on HuffPost Live. She has also been published on Watch The Yard and Blavity.

Aleidra received her Bachelor of Science in Community Communications and Leadership Development from the University of Kentucky (UK). She later earned her Master of Arts in Education (specialization in Higher Education Administration) from Louisiana State University (LSU). Aleidra is a board member for Continuity, an active member of the Gamma Omega Chapter of Alpha Kappa Alpha Sorority, Inc., a “Big” in Big Brothers Big Sisters, and a member of the choir at Friendly Temple Missionary Baptist Church in St. Louis, MO.

4 replies on “This is a Call In NOT a Call Out: Why are Kappas Hosting a (Pre) Super Bowl Party?”

And I understand that many have boycotted the NFL including myself. But the true boycott is avoiding putting money into their pockets. I believe unless you have a Nielsen rating device in your home or place of business then if you watch the game it doesn’t matter they don’t really know. But as long as you’re not purchasing NFL 5 then you’re not financially supporting them and that’s What Hurts the Most.

Dont call someone out and leave out the name of the offender. Signed Every Kappa everywhere. Dont hide the hand.

You probably skated through your org or have been a Nupe hater from day one!! You should know that this isn’t something recognized nationally & not supported by IHQ!! Whatever org you’re apart of, you should know that you can’t talk for or control everyone in that org, so why would you expect this to be any different!!?? What about the fact that the Kappas that are throwing this party could be doing this to honor the Nupes that are playing in the game?? How bout you STFU & worry about your own wack @$$ org!!??? NUPE NUPE!!!!!👌🏾👌🏾👌🏾