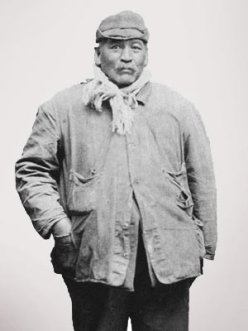 George Speck was born in 1822 to a black father and Native American mother in Saratoga Lake, NY. His father was a jockey and used the name “Crum,” leading George Speck to go by George Crum.

To George Crum’s surprise, the customer actually loved the chips, and other customers soon began to ask for his “Saratoga Chips.” They quickly became a favorite.

George Crum later opened his own restaurant in 1860, “Crum’s House.” A basket of potato chips was placed on every table. Even though he is credited with inventing them, George Crum never patented his potato chips.

Today, we remember George Crum for creating the potato chip that we continue to enjoy over a century later. We are thankful for his sarcastic personality that lead to the invention of one of America’s most popular snacks.

Aleidra Allen is a social change advocate and entrepreneur. With a background in higher education administration, Aleidra served as a higher education practitioner for 4 years. During that time, she coordinated leadership programs and multicultural education, and advised student organizations and fraternities and sororities, . However, as society entered into the current social movement, Aleidra’s career was redirected.

In September of 2017, Aleidra took a leap of faith and left higher education to start her own business. She is now the founder and owner of PIE, which stands for Purpose In Everything. PIE is a start-up social enterprise that sells every day products, adding purpose to the purchases by donating 5% of its net sales to fund social change work. The products are also ethically made, being sweatshop-free, and many of them are environmentally friendly.

PIE is committed to social justice, with the goal of inspiring consumers to contribute to social change through conscious and intentional buying. You can follow PIE on Facebook, Instagram, and Twitter: @piemovement, and visit the PIE website at www.piemovement.com to #BuyOnPurpose. If you are interested in having Aleidra facilitate diversity and inclusion trainings/workshops for you school, organization, or corporation, please email info@piemovement.com.

Aleidra has shared her perspectives on larger platforms as a repeating guest on HuffPost Live. She has also been published on Watch The Yard and Blavity.

Aleidra received her Bachelor of Science in Community Communications and Leadership Development from the University of Kentucky (UK). She later earned her Master of Arts in Education (specialization in Higher Education Administration) from Louisiana State University (LSU). Aleidra is a board member for Continuity, an active member of the Gamma Omega Chapter of Alpha Kappa Alpha Sorority, Inc., a “Big” in Big Brothers Big Sisters, and a member of the choir at Friendly Temple Missionary Baptist Church in St. Louis, MO.